Stuff for a Tuesday afternoon

Tag along with kindertrauma on a Horror Movie Bar Crawl

Hammer Films has begun shooting in Donegal on its first production in almost 30 years - a horror thriller entitled The Wake Wood.

The film - about a couple who try to resurrect their dead daughter - stars Timothy Spall and Aidan Gillen.

Blood Splattered Blog takes a bite out of Cannibal Terror.

Steampunk Is The New Black - part of Steampunk Week at The Galaxy Express!

Close Encounters of the Third Kind
Richard Dreyfuss stars as an average guy who stumbles unto an encounter with a UFO while the U.S. government plots an elaborate cover-up of the impending UFO landing. One of the best science fiction films of all time!

Naruto
The Village Hidden in the Leaves is home to the stealthiest ninja in the land. But twelve years earlier, a fearsome Nine-tailed Fox terrorized the village before it was subdued and its spirit sealed within the body of a baby boy--Naruto Uzumaki!

Death Note
Light Yagami is an ace student with great prospects and he's bored out of his mind. But all that changes when he finds the Death Note, a notebook dropped by a rogue Shinigami death god. Any human whose name is written in the notebook dies, and now Light has vowed to use the power of the Death Note to rid the world of evil. But when criminals begin dropping dead, the authorities send the legendary detective L to track down the killer. With L hot on his heels, will Light lose sight of his noble goal...or his life?

Random Videos of Geekery: The Adventures of Superman - The Haunted Lighthouse!

The 50 greatest villains in literature (The Telegraph)

26 Cthulhu from The Call of Cthulhu, by HP Lovecraft

Gigantic tentacular star-spawned Presence in Lovecraft's baroque cosmogony, sleeping in a sunken, "non-Euclidean" city until the time comes for it to swallow the world's soul. Frequently evoked in barbaric, indecipherable language, although some people quite like Lovecraft's prose. Gloriously, you can now buy a T-shirt reading: "What part of 'ph'nglui mglw'nafh Cthulhu R'lyeh wgah'nagl fhtagn' don't you understand?"

Black Spirits and White, A Book of Ghost Stories by Ralph Adams Cram(1895)
Werwolves (1912) by Elliott O'Donnell
The Mystery of the Green Ray (1915) by William le Queux 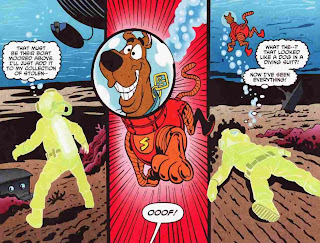