Midnight Marquee has released it's first all digital issue! It's superb, as expected, and it's free (though a small donation would certainly be in order if you like what you read!)
I couldn't find a table of contents online so here's a cap of the front cover... 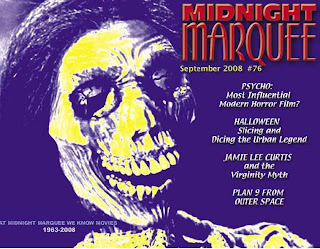 io9 has an in depth investigation into the Fringe ARG that's been floating around in the run up to the show's premiere. (ARG = Alternate Reality Game)

FRANKENSTEIN and DRACULA: The Complete Stories

"While doing double features all these years, I always wondered what it would be like, if the first two films in both the Dracula and Frankenstein franchises were re-edited into one long film. That is, combining FRANKENSTEIN with BRIDE into one movie, and DRACULA with DAUGHTER into another. Most of their sequels are self contained adventures, whereas the first sequels in both series pick up right after the originals.

Has anybody here tried to do something like this?"