Some nice posters and lobby cards up at Wrong Side of the Art including Trog, The Day Mars Invaded Earth, Unnatural, Children of the Corn, and The Incredible Petrified World.

Cool-Mo-Dee offers Out of the Night #6

Z0mbie Astronaut has The Dunwich Horror as read by Roddy McDowell.

Temple of the Spider at Diversions of the Groovy Kind

Casper the Friendly Ghost
From the original 1950's animation, Casper reigns supreme in these rare theatrical Technicolor cartoon shorts. Never has there been a friendlier ghost than Casper, and now these charming cartoons are here for a whole generation of fans! Watch Casper & his friends have all kinds of fun and spooky adventures.

Moon Phase
While Kouhei ranks among the best in paranormal photography, he's never actually seen a ghost! So when he fails to capture a hauntingly beautiful young girl on camera, he knows there must be an explanation.

Forever Knight
Nick Knight is a 13th-century vampire living in modern day Toronto. In an effort to regain his mortality, Knight atones for 700 years of evil by fighting crime as a homicide detective for the Toronto police. 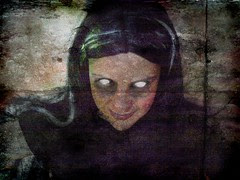