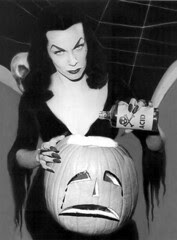 vampira (by hastingsgraham)
Kindertrauma on Amityville II: The Possession

Ryan Brennan at The Monsterverse reviews Dracula, The Dark Prince

Journey to the 7th Planet @ Random Acts of Geekery

Science Fiction Theater Presents: Farewell to the Master @ Diversions of the Groovy Kind

Ectoplasmosis reviews Night Of The Cephalopod

This sequel to 'The Abominable Dr. Phibes' finds Vincent Price trying to revive his dead wife. His quest for the necessary elixir takes him to Egypt, to an ancient chamber buried deep in a mountainside, once used by the pharaohs.

Captain Holling (Noah Beery) is relieved of command of his ship after he suffers a nervous breakdown. His replacement, Captain Downey (Boothe Howard), takes over the liner just as it is about to be used for an experiment in remote control....

Plus loads of Christmas Links over at Santas Working Overtime
By Prof. Ravensdeath at November 29, 2008