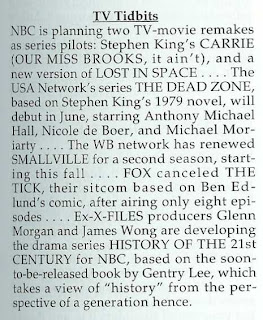 While browsing a back issue of Scarlet Street (# 44, 2002) I noticed the TV Tidbits section mentioned three projects I'd never heard of. Interest piqued I figured I'd use a bit of my, admittedly mediocre, Google-Fu to track down some info on...

Carrie Pilot/Movie: I have only the vaguest memory of this and that came after reading a couple of (decidedly mediocre) reviews. Obviously never made it to series thus avoiding a certain train wreck.

The Robinsons: Lost in Space Pilot/Movie: I assume this is the Lost in Space project named. I'm clearly getting old. This aired a mere 5 years ago and was directed by John Woo and yet I have no recollection of it. Friday Night Lights' Adrianne Palicki played Judy.

The History of the Twenty-First Century: Based on frequent Arthur C. Clarke collaborator Gentry Lee's novel. Though I had initially assumed, thanks to my crappy memory, that all three projects were non-starters it looks like this is the only one not to make it.

"While talking to SCIFI.COM, Wong spoke of the developing concept, saying, "It's sort of a historical perspective of the future. It's really a kind of family drama set in the future, with the implications of what the future brings ... and sort of the ethical and moral problems, and also the day-to-day problems, that Gentry has envisioned in the near future or [what] the next 100 years will be for us."

If I'd known I'd be batting .333 on these I might not have bothered posting but, since I'd already scanned the thing, I figured what the heck.
By Prof. Ravensdeath at March 12, 2009