A is for asphyxia 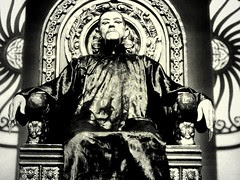 Twilight of the Goths:Frankenstein and the Monster from Hell @ Frankensteinia

Don't Look Now: "Did You Really See Her?" @ Spectacular Attractions

Bedlam @ Only the Cinema

MIND MELD: What Are The Most Realistic (and the Most Ridiculous) Uses of Science in SciFi Film and TV? @ SF Signal

Vulcan: The Soul of Spock @ The House Next Door

Top 13 Stupidest Decisions In The History Of Horror Films @ DailyFill

The Mutant Beast @ Internet Archive
A garbage eating monster terrorizes the town of Milpitas, Ca. There is a special appearance by KTVU's late, great "Creature Features" host Bob Wilkins. It's got "student film" written all over it, but it's not too bad..

The Rats are Coming! The Werewolves are Here! @ Internet Archive
The Mooney family has some strange secrets, as a man who married one of the daughters is soon to find out. Directed by Andy Milligan..

The Faceless Monster
Ennio Morricone provided the creepy score that grounds this Italian horror flick starring Barbara Steele and Paul Muller. When a cuckolded scientist kills his unfaithful wife and her lover, he soon realizes that vengeance and retribution can come from beyond the grave.

Guru, the Mad Monk
Set in 1480, this Gothic horror film stars Neil Flanagan as Father Guru, a schizophrenic, prison-colony chaplain who exploits his power to the max. With his church running low on funds, Guru entangles a young couple in a plot to ambush travelers and sell their cadavers to a neighboring medical college. Helping the mad monk are his vamp mistress (Jaqueline Webb) and a one-eyed hunchback named -- what else? -- Igor (Jack Spencer).

Child's Play 2: Chucky's Back
After the tragic events of the first film, Andy's mother is committed and Andy (Alex Vincent) ends up in foster care. Meanwhile, the killer-doll's manufacturer reconstructs Chucky to salvage its reputation and prove that nothing was wrong with the doll. But something was, and in re-creating the doll, the company has resurrected the soul of the murderous Charles Lee Ray. Soon, Chucky (voiced by Brad Dourif) is up to his old tricks.

Nightfall @ Diversions of the Groovy Kind

The Mirrrors Of Tuzun Thune @ The Bronze Age of Blogs

Decoy of the Doom Statues @ Again With The Comics