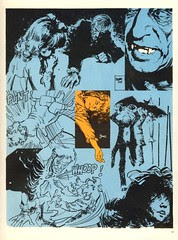 Dracula, Bram Stoker's classic novel of bloodthirsty terror has been rich fodder for the theater since the book was originally published. The late 20th century success of The Phantom of the Opera has spawned new generations of Grand Guignol extravaganzas. Here we sample but a few examples of this corpulant genre...

The Lady In White
She Devil/Nosferatu