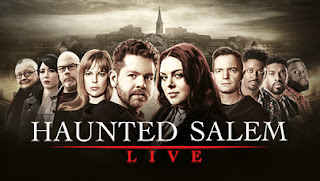 The distasteful exploitation of the Salem Witch trials continues unabated. It’s all about commerce and it’s no surprise when the first super-duper really we promise haunted location they visit is a local restaurant. Fake science, fake history, fake documentary. A far more effective program would be live storyteller tours or dramatic reconstructions. The moment the EMF meters or con man psychics show up I’m done.

A pet peeve - they keep referring to the Salem trials as a dark stain on American history when it took place nearly a century before the nation was founded.

A SyFy original that brings nothing original to the “teens partying in a haunted house” genre. It would take real effort to care any less about these characters though so it’s all just background noise. Not godawful though.

Terrific concept marred by misguided allegiance to the “Found Footage” genre. Every aspect of this film would have been improved by the removal or minimization of the found footage aesthetic. Disappointed after hearing years of hype.

The first hour is essentially an infomercial for various Haunts. Take out the brief narrative bits and it could be footage from a middling Youtuber. And those are the highlights. Another wasted opportunity to make a truly classic Halloween horror. At least this one wasn’t as hyped and I went in with lowered expectations. Still disappointed.